skip to main | skip to sidebar


I think the political cartoon below by Pat Bagley nicely sums up the split mind of the USA.  On one side, you have people pushing for progress and greater awareness.  You can easily imagine a multicultural diversity of folks.  On the other, you have a faction in denial, driven by fear and hate, locked into closed-mindedness.  This, it is clear, is the Republican side, the stubborn  and bitter white core that is, demographically, fading in numbers relative to other ethnic groups.  These are the folks that buy readily into, say, Donald Trump’s intense racism when he says he wants to build a wall between the US and Mexico.

I don’t write on this blog much anymore, mostly because I am fixated on my novel, which involves two very different cultures and two sets of protagonists.  Another reason, much less, is that I feel the main points I want to emphasize are fairly simple.  Bagley’s cartoon sums a lot of it up.  I’m just repeating myself when I lament that we are in the midst of the Earth’s sixth mass extinction, and our declining war-addicted empire just doesn’t care.  It comes down to human psychology.  Our enemy is not ‘out there’ somewhere.  To quote a famous cartoon character, "The enemy is us."

What a world you and I were born into, worthy of awe and disgust.  It's a human-dominated place, on the verge of nuclear war or some other civilization-ending chaos.  We're about to merge our bodies with computers and cyborgery.  Just the last few hundred years have seen the Earth change in ways not seen in its 4.5 billion year history.

Still, we humans act more like ants than empathic, sentient creatures.  How many of us are sickened and grieved by the genocide of the Native Americans that took place not long ago, committed so that the USA could expand, following its selfish goal of “Manifest Destiny.”  Every privilege I have, every bit of time to write or think, or just be free of worry, comes at the price of unmentionable injustice.
None of us should forget, but most of us do.  And we who benefit from atrocity deserve our burden of shame.  This is not ancient history.  Scalps sold, massacres conducted, hatred incarnated into murderous cruelty.
But, yes, we remain ant-like.  Look at how many people cling with nostalgia to the Civil War (1861-1865).  We are very much still children of those times, and its White supremacy.

It's impossible to face all the horror of what we've done and do, unless you also look at the miraculous side of life.  My life is a strange duality of fascination for the beautiful, and utter disappointment in humans.  Also disappointment in the Architects of this universe, so magical and yet tragically callous.  Nature is resplendent and giving, yes, but also inveterate with violence.  Themes of predation and brutality are essential cogs in the clockwork of ecological systems.

I frequently rail at God, though I doubt there is one ‘God’ who created all this.  Still, such a concept supplies an easy, cathartic target.  A convenient effigy.  I often tell God how much I hate him (usually it is "him," to include my disgust for patriarchy).
Other times I am in love with God/dess.

Beauty and ugliness.  God as wondrous or diabolical.  Humans as incredible or disgusting.  We humans can do better.  But we are also very much pawns of greater systems and zeitgeists.
It makes sense that we are fascinated by vampires and werewolves.  I think this is so in large part because humans are, in a legitimate, physical sense, vampires and werewolves.
We consume life, even torture it in factory farms, to survive.  Our need to consume life, magnified through the egregious lens of consumerism (note the essence of that:  consume), has turned much of the planet into a stranglehold of crop lattices and rainforest-slaying ranches.
We are also werewolves.  We wear pretty faces.  We smile and act cute or noble.  We proclaim Liberty, Equality and all that.  But there's another side.  The full truth exposes us in World Wars, sweatshops, an the industrial claws of avarice that swipe the skin of this abused world.
Anyone reading this is situated somewhere in the sexist, racist, classist pyramid of status, wealth and power.  Behind the smiles, then, gross injustice.  And, as I said above, the specter and very real financial benefit from recent atrocity of Indigenous people and the slavery of Black people.

Yes, we are vampires and werewolves.  All humans, really, in some way or another.  But some are worse, much worse.  And that brings me to my main point:  we can do good acts, we can improve.
This philosophy revolves around polarities--good and evil--yet acknowledges the importance of gradations between them.  The extremes are there, but we play out our lives in-between.
That doesn't mean we can't seek the good.   Or do good acts.  We can each move forward as individuals.  And, since we're all interconnected, we can move collectively.  Social, cultural and technological networks interrelate us.  Feminists, for example, have known for quite a while that self-identity is in large part formed by relationships.

My own spirituality now accepts spirit guides--forces that include, as part of their complexity, a quest to improve ethically.  This isn't anything new, really.  Shamanism was the very first religion on the planet.  We've lost touch with its psychic power.

For myself, there is no sense to say there is an all-powerful, all-Good God watching over us.  Such a being would not allow the evils we face and perpetrate.  As I said above, I like to rail at God, hate God, wrestle with God like Jacob did in the Bible.  Heck, Jacob even won, until God cheated and dislocated his hip.
If we do seek the Good, we can move our global civilization away from its current trajectory toward another world war.  At some point, in our technological progress, our ability to create thinking machines will allow us to create ethical beings, good beings--Angels.  This concept, of what an angel could be, or do, is well-worth exploring as we move forward and create more and more capable robots to do more and more work.
Ethical algorithms are already being developed for self-driving cars.

Whatever we do, we need to get away from the sociopathic mindset that the Earth and its creatures are just bland resources, numbers in a profit equation.  We need to create cultures of governance and corporate leadership that do not reward and thereby advance narcissism and sociopathy.

You want to know what freedom is?  It is becoming more and more aware, consciousness-raising, in a context of being able to make wise choices.  Indeed, greater awareness is a curse, if you can't handle it.  But if you can--that is freedom.
Fly Well In the Dark,
Owl 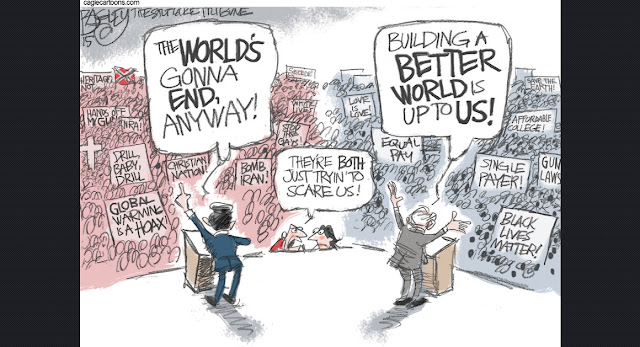 Owl Who Laughs
In the spirit of our Founders, who published a good number of anonymous tracts, I withhold personal information.