skip to main | skip to sidebar

Quick as a wink, Issue 91 of Crack the Spine launches! See my previous post for more on this fast, effective journal. If editing was like gunslinging, and issues were bullets, the editor would be Queen of the Old West, taking down all rivals.

I’m thrilled that my poems “Guitartist” and “Calling In Sick” start things off. And there are some very cool graphics that immortalize one of my favorite lines from “Calling In Sick,” which is:

Visit 91 on Issuu.com to see more! Here is the link:


Thanks again to the incessantly diligent and perceptive editor, Kerri Farrell Foley.

Posted by Owl Who Laughs at 9:54 AM No comments:

Kerri Farrell Foley is unique among the hundreds of editors I have encountered in over ten years of sending out submissions. She runs a weekly--that’s right, weekly--zine called Crack the Spine. Even more astounding, it is continuous in offering high quality work.

The next issue is 91, which will include my poems “Guitarist” and “Calling in Sick.” I appeared in a previous issue of CTS but that was, I dunno, issue 45 or something. It seems like so long ago...

How does Foley produce a new topnotch issue every week? Personally, I think it is magic. A beyond-human feat. If I dared to speculate ... for one thing, the issues are small, each with a few poems and short stories. Indeed--

Issue 90 had one poem. Issue 89 had four poems. Issue 88 had two poems. Issue 87 had four poems. That’s eleven poems in a month (and even less in terms of contributors, due to multiple pieces being accepted, in some cases). In other words, the quantity pretty well approximates the size of a quarterly journal.

However, the weekly pace must require a lot more time-management, plus effort in terms of formatting/production. The sleek phenomenon of desktop publishing surely helps Foley with this. In fact, she seems masterful at using technology at its full zing.

Hold onto your hat: Foley is also, somehow, conducting interviews with writers in-between the issues. Her indefatigable variety, keenness, organization, and joie de vivre make her one of the most remarkable, dedicated, passionate impresarios on the net, or anywhere, for that matter.

Wait a minute, hold onto your second hat: Foley also produces quarterly anthologies! That’s right. In the time that it takes most editors to start putting together a single issue (and many take much longer), Foley is picking and choosing ‘best of’ work from ten issues. And packaging and marketing it.

She also has a neat gimmick. A contributor’s chance of getting in an anthology increases if there are positive comments on the contributor’s work. Naturally, contributors cajole, importune and strong-arm their friends (and fellow grad students, I suspect, in some cases). In this way, Foley ends up with a good number of comments in her issues. Sometimes there are no comments, which is pretty common in most all journals; but other times, CTS manages to ramp up the activity in the peanut gallery.

The wording Foley uses to entice contributors is brilliant, actually:

Foley is really smart, really savvy, and yet most exciting of all, she has the gift of discernment when it comes to stocking her literary shelves. The result is a prolific magazine that is also redoubtable, helmed by someone who is truly extraordinary, truly original.

Replaced By a Computer

Go to the link below at Samizdat Journal, and click on "listen now" to hear an internet computer read my poem "Over Cocktails," which ironically is a criticism of conformity. It's pretty hilarious.


Computer Reads My Poem "Over Cocktails"

Posted by Owl Who Laughs at 3:27 PM No comments:

Drunk Monkeys is fantastically multifaceted. In fact, the first time I visited, I got pulled into reading movie reviews. And the second time. And when I visited again today, another movie review pulled me in. And then I started reading the interviews. There is also a music section, and, oh! literature, such as intoxicating short stories and vignettes. And of course, the poetry.

Ah, the poetry. They don’t publish much of it, but what they do give us--like the rest of their offerings--is high impact: boredom-busting and emotion-spiking. I’ve fallen into fits of goo-gooed ecstasy, knowing that my piece “Kindred” will be appearing.

I had trouble ferreting out the names of the staff. They are quite humble as well as shockingly good at what they do. Seriously, this magazine is a full pro production, one that dares to take on a whole range of art forms--and it succeeds.

The person who contacted me is Matthew Guerruckey, who, I learned by excavating through web pages, is Managing Editor. Some of the other staff are: Donald McCarthy, Gabriel Ricard and Ryan Roach. I’m pretty sure there are more of these cerebrally gifted gremlins; but they are a cryptic group, not especially fond of the spotlight.

But I think they deserve it. The interviews, for instance, are excellent. And their love of film, music and magical words is more than apparent.

Most of all, you have to admire how they have taken a title like Drunk Monkeys and retained its sassy naughty puckish flair, while at the same time tossing out handfuls of exquisite art. Because of their skill, which is only superficially silly, we all get to swing on the monkey bars.

Ants Have Journeys Too

Ants have journeys, too.

Irista Baphomet
Posted by Owl Who Laughs at 11:08 AM 1 comment:

This was originally published in Wilderness House Literary Review, and is based, ekphrastically as they say, on an artwork by Maine's brilliant anti-war artist, Natasha Mayers (picture below, used by permission).

Fly Well In the Dark, 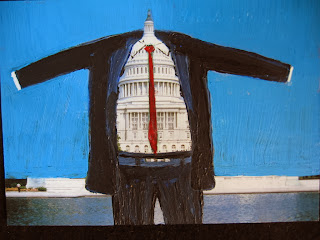 a ribcage of policy
flatters the tie.
paunches of marble,
silkblood river red.

liberty
small on the cupola,
weathered in green copper,
too shrunk to see.

the blue
of the imported wool
opens without hands,
without ears,

no face.
a humanless

just one more
architectural carcass
of another patriarchal
turkey.

Owl Who Laughs
In the spirit of our Founders, who published a good number of anonymous tracts, I withhold personal information.